As nursing home deaths continue to drive many of the fatalities in California — 35% of COVID-19 deaths have occurred at senior living facilities — state health officials are moving too slowly to require them to test all residents and workers, advocates and families say.

The California Department of Public Health on May 11 gave each of the state’s 1,224 skilled nursing homes until June 1 to submit a plan for regularly testing residents and staff. But waiting until June — months into the pandemic that has already killed 1,143 residents and workers at the state’s nursing homes and assisted living facilities — is too late, those critics say.

“You have to wonder how bad this is going to get in the meantime,” said Michael Dark, a staff attorney at the California Advocates for Nursing Home Reform.

Even San Francisco, the only Bay Area county to mandate testing for all residents and staff at each of its 21 nursing homes, is moving more slowly than many families would like, in complying with its own order. Just five have completed testing or are almost done — about 40% of the city’s total nursing home residents and staff, Grant Colfax, the city’s public health director, said Tuesday. 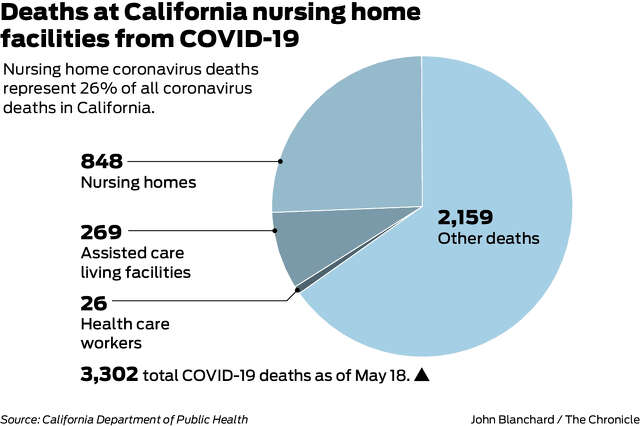 In the early weeks of the pandemic, it was nearly impossible to get a coronavirus test unless a person was sick enough to be hospitalized with severe symptoms. By early April, access to testing had improved in many parts of the state as dozens of testing sites opened and expanded services, often for free. But testing in nursing homes and other senior living centers, which experts and advocates say should be retested every few weeks to detect cases, has been slower to take off.

Not only have mandates been slow in coming, but the task of testing everyone in nursing homes is monumental.

Testing an individual is relatively quick and straightforward, though uncomfortable. At drive-through and walk-up testing sites, it typically takes just a few minutes to collect a nasal sample. But testing hundreds of residents and thousands of workers quickly becomes a logistical nightmare.

For example, at Laguna Honda, San Francisco’s largest skilled nursing facility, testing everyone took weeks because the 1,800 staff members work in shifts and not all are scheduled to come in every day — requiring those who conduct testing to come back repeatedly to make sure they’ve swabbed everyone. Testing 700 residents, many of whom are immobile, frail and elderly, also takes time.

State officials have said they will soon announce a plan for how skilled nursing facilities should enact routine testing.

“The plan must be comprehensive and include statewide requirements, while also allowing the flexibility needed to account for significant regional variations in our nursing homes,” a department spokeswoman said Tuesday.

In San Francisco, testing at four additional nursing homes is under way this week. It took officials more than two weeks to test all 2,500 staff and residents at Laguna Honda. Testing began May 4; all residents have been tested and staff will finish getting tested next week, Colfax said.

“Their priorities are backwards,” retired San Francisco geriatrician Teresa Palmer, whose 102-year-old mother lives at the San Francisco Campus for Jewish Living, a skilled nursing facility in San Francisco, said of the state opening dozens of testing sites in rural counties but not, in her view, prioritizing testing at nursing homes. “They’re testing every Tom, Dick and Harry but not testing nursing homes.”

The health department is expected to begin testing at the Campus for Jewish Living on Thursday, said a spokesman for the facility.

Meanwhile, health officials throughout the state are still struggling to obtain enough swabs and other testing supplies.

It wasn’t until the last few weeks that, with the help of two private companies the city contracted with — Burlingame’s Color Genomics and San Francisco’s Carbon Health — that San Francisco had enough testing supplies and personnel to test everyone at Laguna Honda. The supply chain is still not entirely reliable.

“It was terrible, and now it’s just bad,” Dr. Ayanna Bennett of the San Francisco Department of Public Health said of the department’s access to swabs and personal protective equipment for health care workers, two critical components to testing. Even if San Francisco had mandated universal testing at nursing homes earlier, it would have been impossible to implement because the health department was so low on swabs, she said.

Such obstacles show the difficulties in getting fast, efficient testing up and running in the places that need it the most: congregate settings where high-risk, medically vulnerable people are most likely to become gravely ill if they contract the virus.

Testing at Laguna Honda is about 75% complete, and so far has it revealed eight new cases — two staff members and six residents — and all are in good condition, officials said. The residents have been transferred to a new COVID-19 unit and the staffers are self-isolating at home. The positive rates among residents and staff are each less than 1%, well below the city’s positive rate of 7%.

In total, there have been 29 coronavirus cases identified at Laguna Honda, 11 residents and 18 staff, since the start of the epidemic.

But it took more than two weeks to test everyone there.

“That’s crazy,” said Dr. Michael Wasserman of the California Association of Long Term Care Medicine, which has been pressing state lawmakers to impose testing requirements in nursing homes since March. “Whether you engage the National Guard, whether you train staff to do it, it’s doable. The bottom line is anyone who gives excuses right now, I don’t understand.”

Only San Francisco and Los Angeles counties have ordered or directed officials to test all nursing home residents and staff. Alameda County recommends but does not require it, and Solano County is enacting a plan to test facilities every week.

In the Bay Area, only a handful of senior living facilities have tested all residents and staff. Carbon Health, which is working with San Francisco to test Laguna Honda, has contracted privately with three other California senior living facilities to test all residents and staff, including Elder Ashram Assisted Living in Oakland and Providence Place in San Francisco, said Carbon cofounder Dr. Caesar Djavaherian.

In the absence of a clear state mandate, counties are moving forward with a patchwork of different testing guidelines.

In Vallejo, one of the deadliest outbreaks in the state occurred at the Windsor Vallejo Nursing and Rehabilitation Center, where 11 people have died — representing 68% of Solano County’s total deaths.

Bela Matyas, the county’s health officer, said the Windsor outbreak prompted the county to start testing all nine skilled nursing facilities. “This is not a perfect formula, this is the best we can do,” he said. “If you’re doing (testing) less than every day, then you’re compromising.”

At residential care facilities for adults and the elderly throughout California, 1,904 people have tested positive for the virus, and 269 have died.

On May 1, Berkeley Councilwoman Kate Harrison received a startling phone call. A staff member at her 96-year-old mother’s assisted living facility, Westmont of Pinole, had tested positive. The facility notified the county, but Harrison said she was told that the county would not administer widespread testing for the residents or remaining staff.

“I just didn’t really know what to think,” Harrison said. “These are vulnerable seniors who have very close contact with the staff. These people bathe and dress and bring food to the residents.”

Within two days — after Harrison involved the county’s supervisors — testing was ordered at the facility. On May 6, Contra Costa County issued a new guidance that recommends all nursing home residents and staff be tested monthly even if they don’t have symptoms. The county is working on plans for surveillance testing at all care facilities, said Will Harper, a spokesman for the county’s health department.

“I realize that this is a huge burden on local government,” Harrison said. “But I don’t know who else we have.”